Over and above the concession rights to reclaim 760 acres for the Seri Tanjung Pinang Phase 2, TPD is also reclaiming 131 acres off the Gurney Drive foreshore for the Penang State Government at its own cost. The Penang State Government has made known that a public park, Gurney Wharf, is slated to be created within the 131 acres on Gurney Drive foreshore.

TPD, appreciating how special Gurney Drive is in the hearts and minds of Penangites as well as Malaysians as a whole, took the initiative to commission leading local and international architects to produce a concept masterplan for Gurney Wharf for the consideration of the state government. These experts include Malaysia’s GDP Architects who produced the overall masterplan; Grant Associates for the landscaping and Jerde International for the retail F&B component.

The Penang State Government held a public exhibition on the proposed concept masterplan, articulating the concept through a series of curated images, photographs and illustrations. The public exhibition, themed "My Gurney Wharf", received highly positive public response on the concept and plans. In conjunction with the exhibition, a press conference was led by Penang State Executive Councillor and Local Government, Traffic Management and Flood Mitigation Committee Chairman YB Chow Kon Yeow. 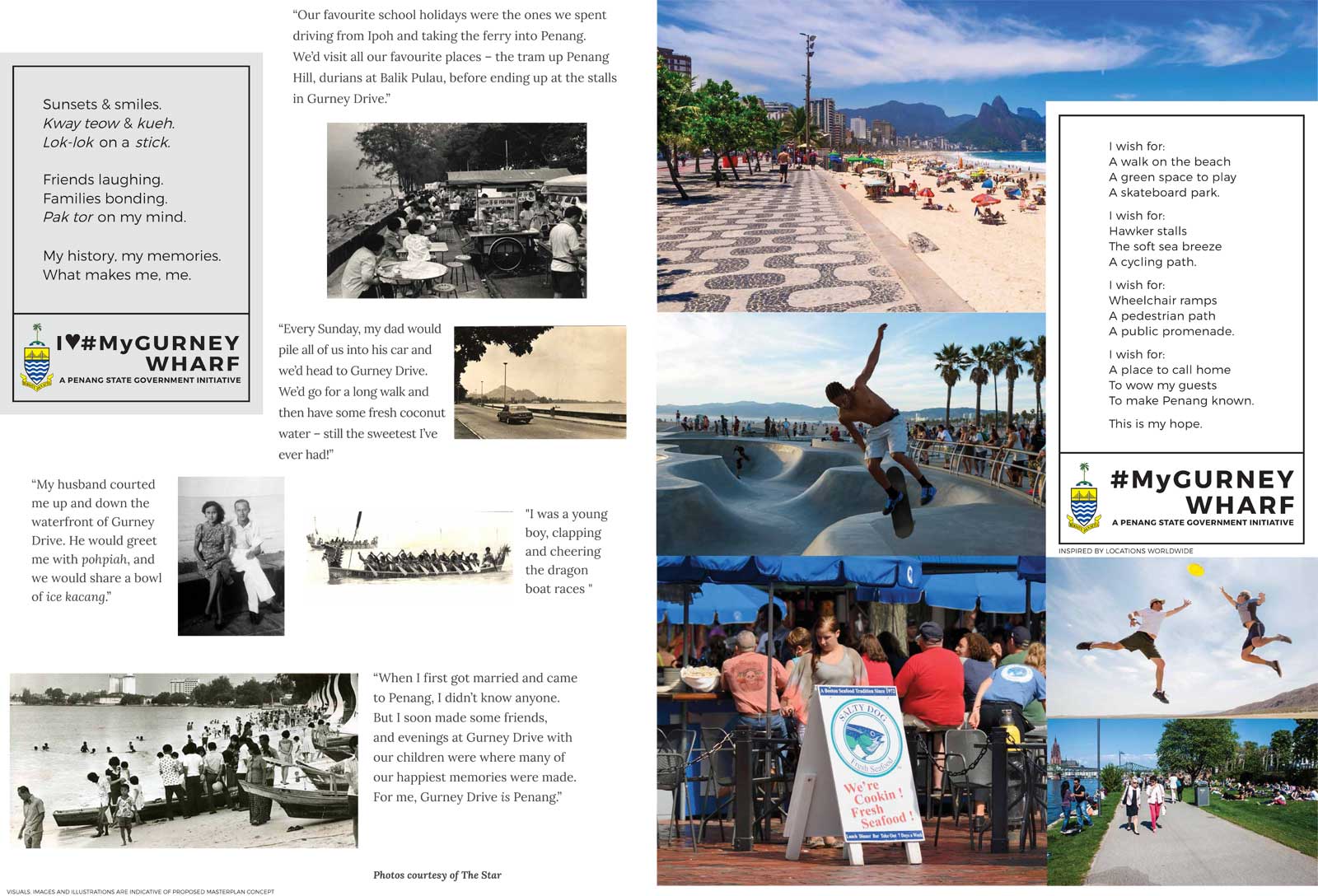 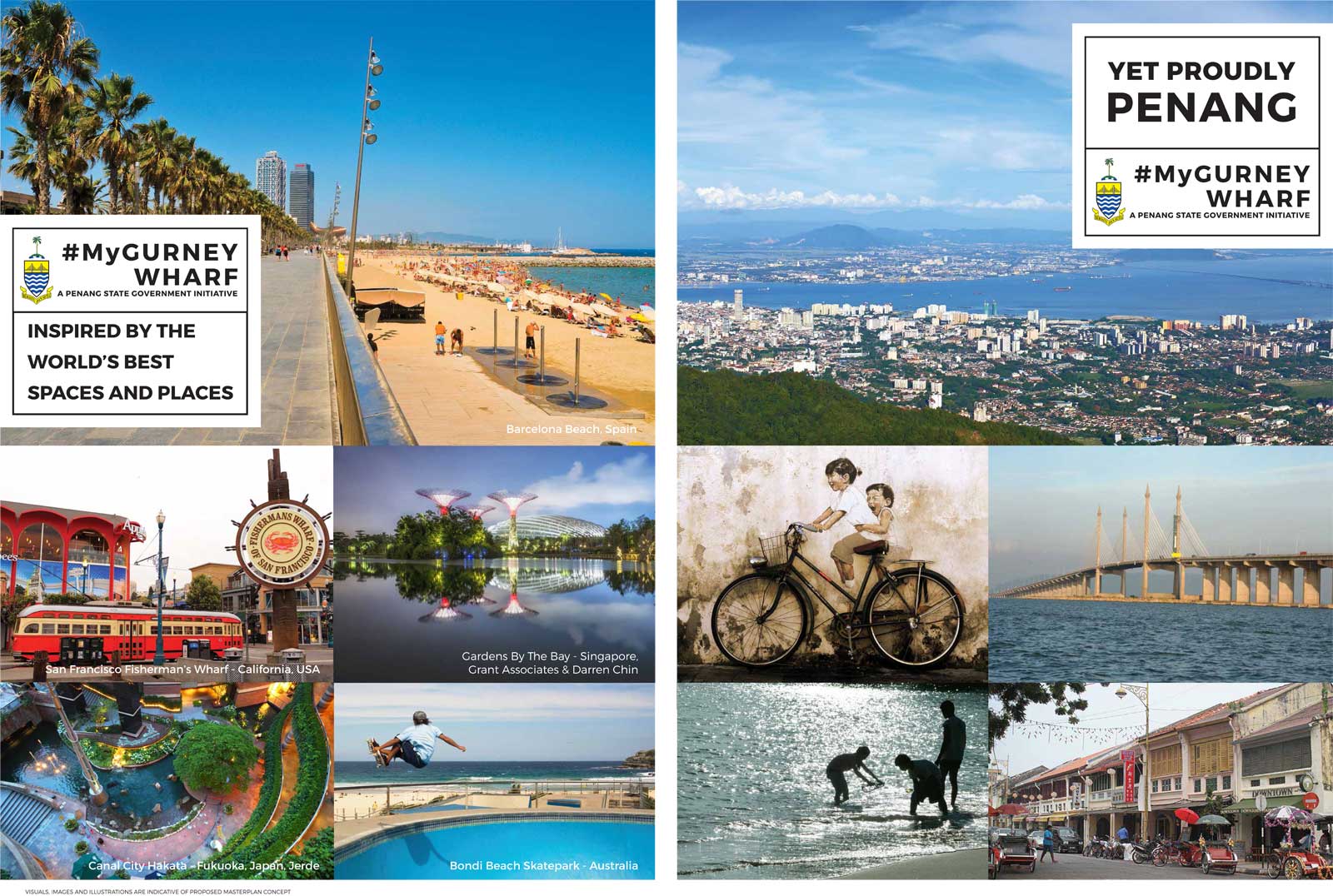 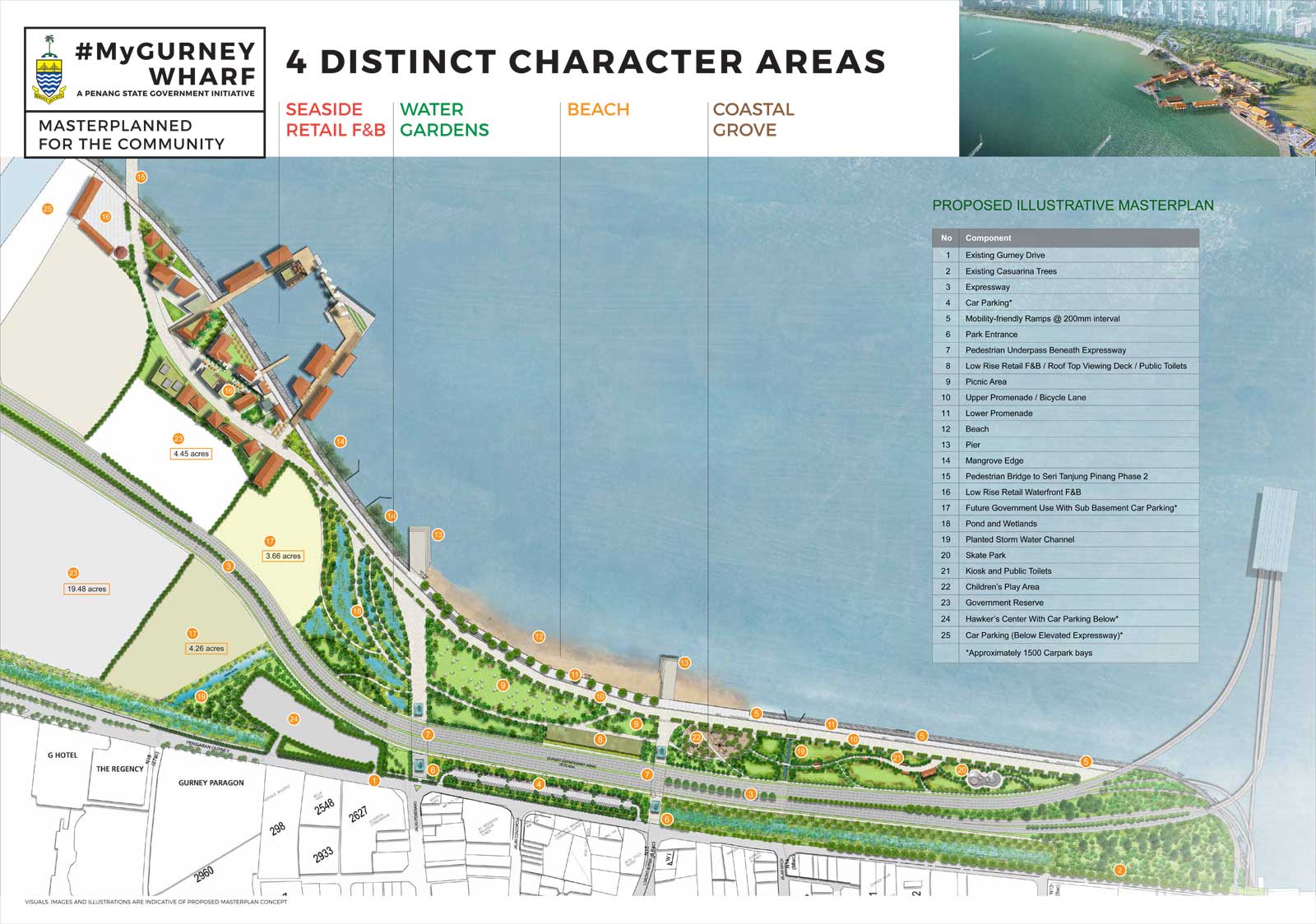 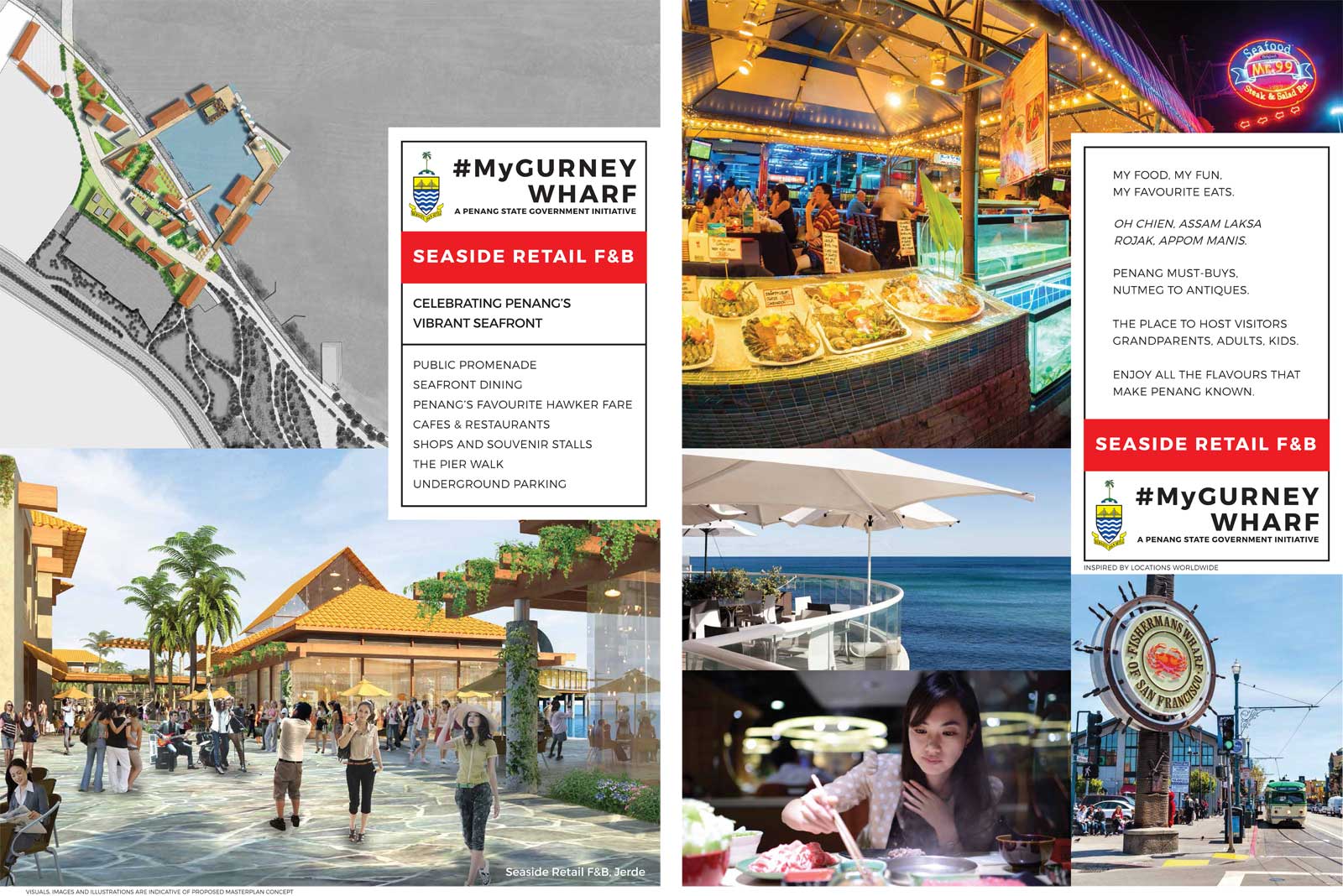 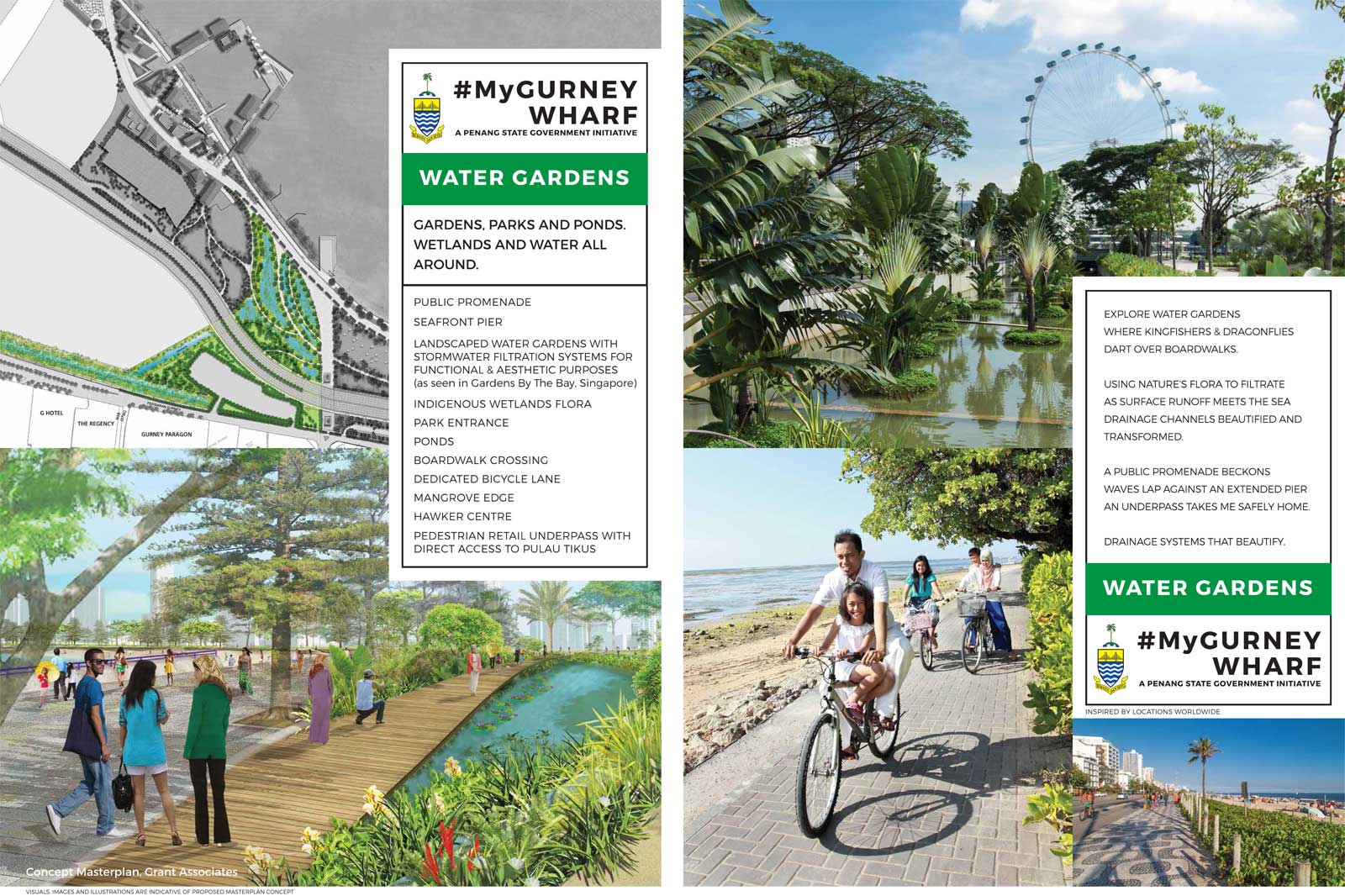 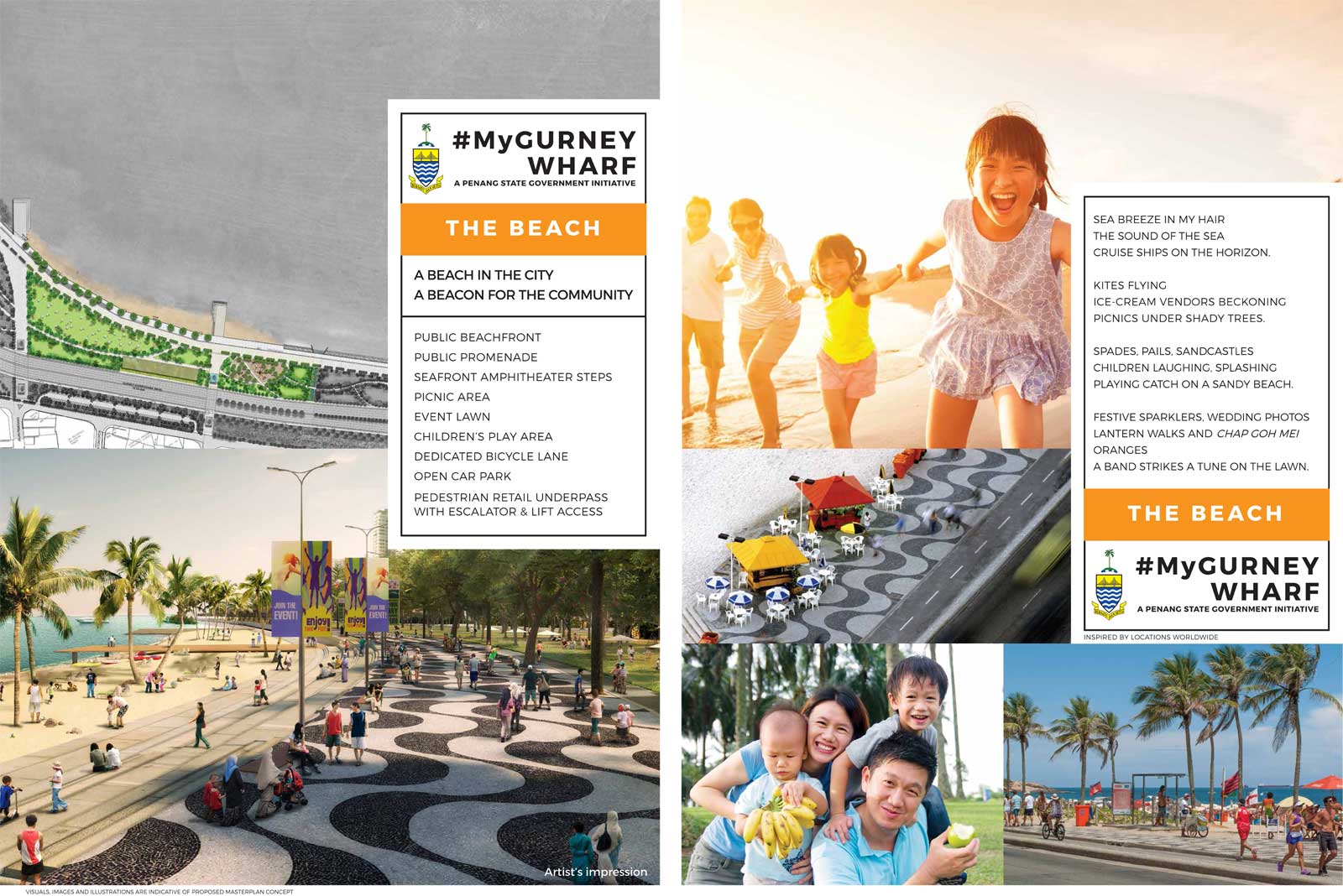 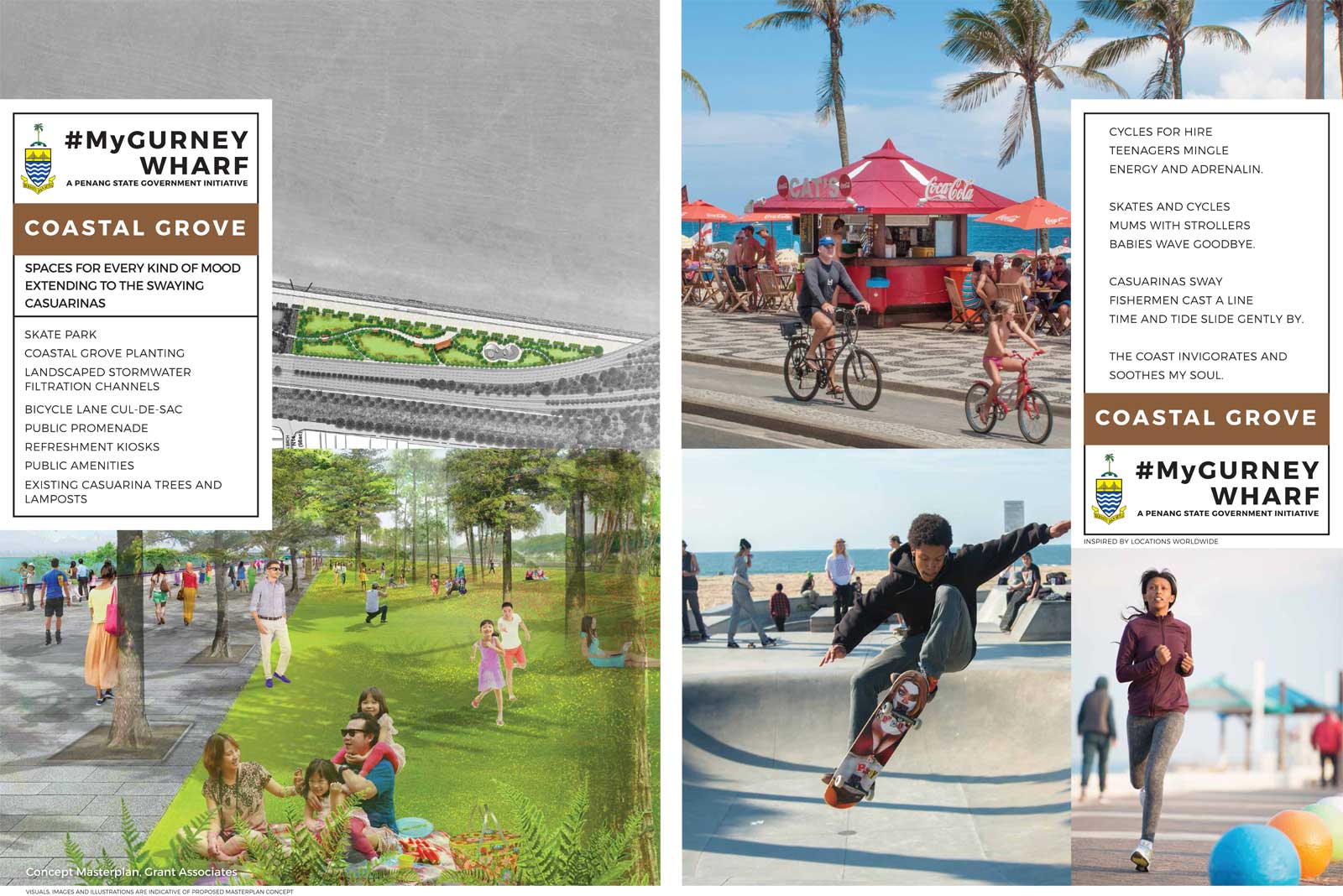 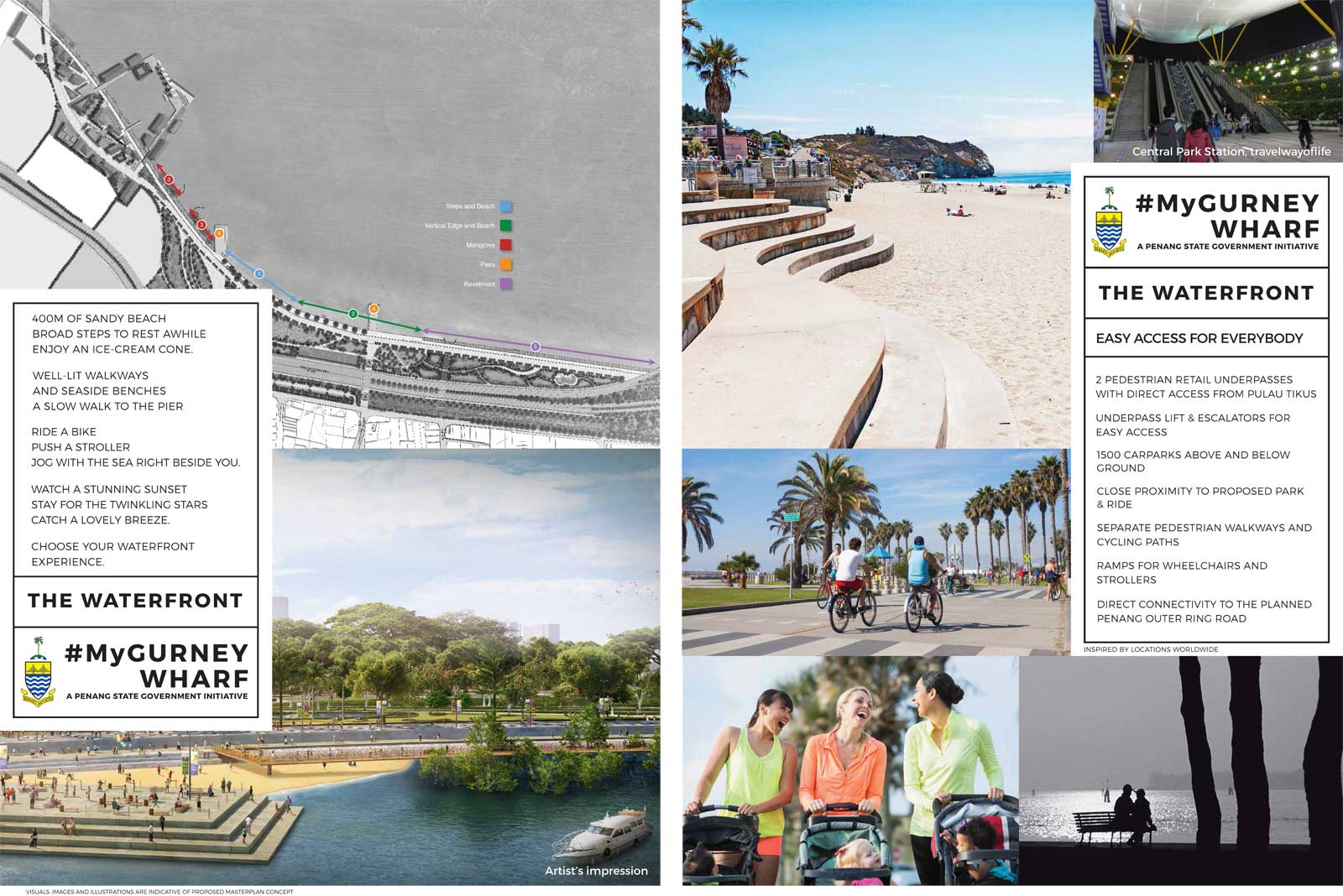 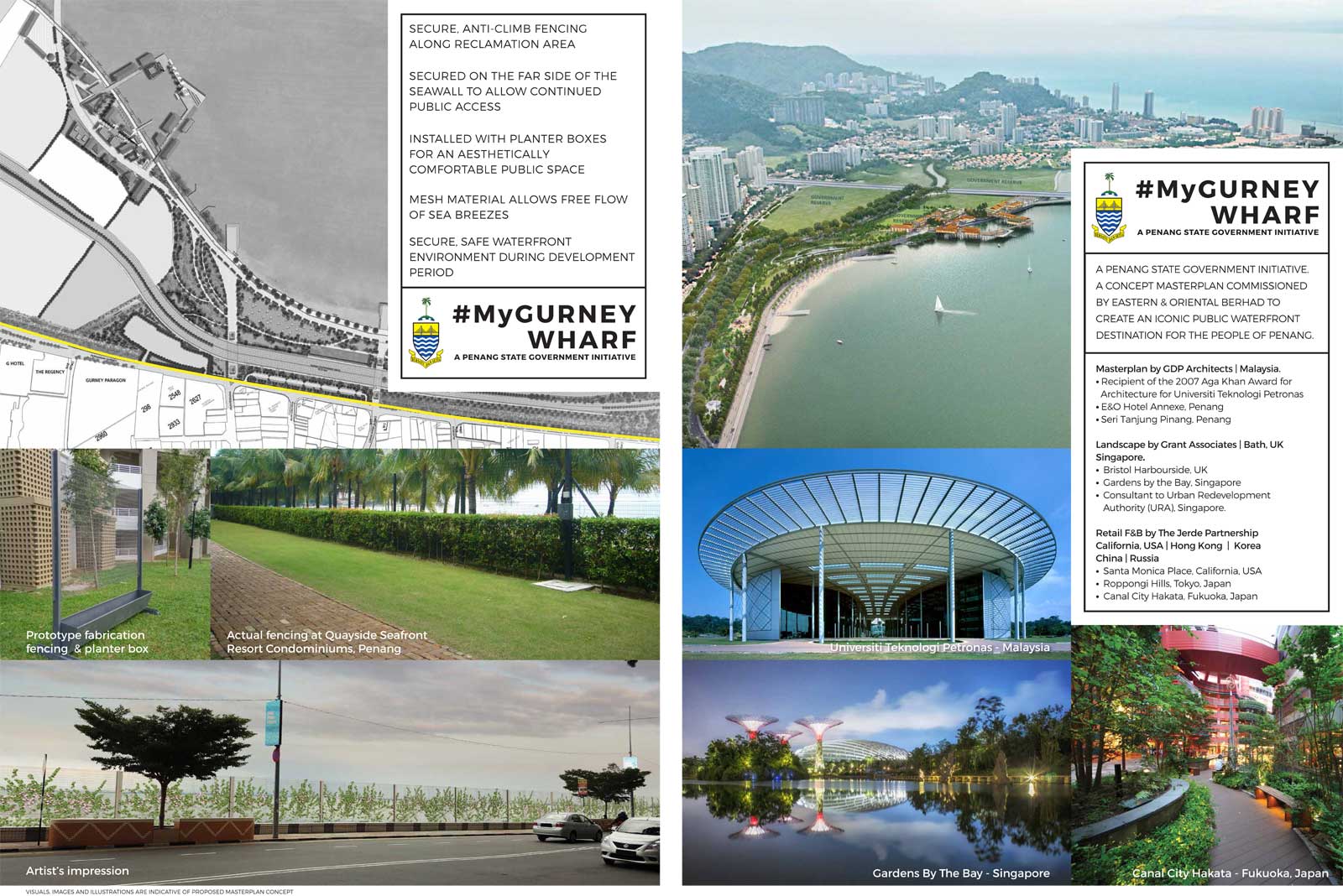 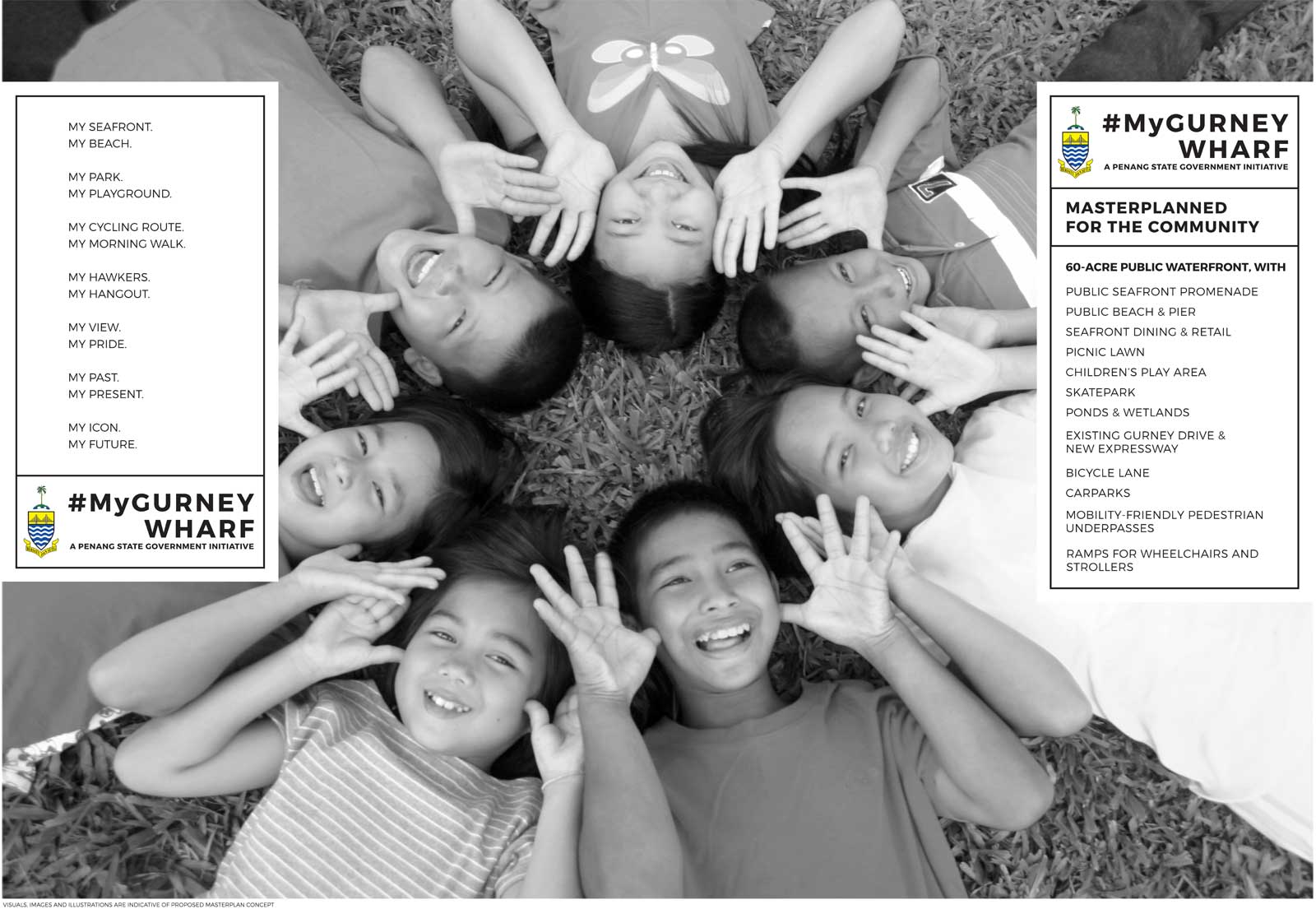 The Seaside Retail F&B celebrates Penang’s vibrant seafront brought to life by elements such as a waterfronting public promenade, seafront dining facilities including the island’s famed hawker fare and a pier walk.

The Water Gardens area will be defined by lush gardens, ponds and wetlands with its most distinctive feature being landscaped water gardens with innovative storm water filtration systems.

Modelled after Singapore’s success with this at Gardens on the Bay, this is a pioneering system in Malaysia which is aesthetically outstanding as it is functional.

As for the Beach area, Penangites would gain greater access to the waterfront that includes a public beach as well as a public promenade.

Within the Coastal Grove, there is a proposed skate park for the youth, not far from the casuarinas lining the present Gurney Drive.

The mobilisation of works for Gurney Wharf commenced with the installation of secure anti-climb fencing along the perimeter of the reclamation area at Gurney Drive on 29 February 2015. The anti-climb mesh material selected for the fence ensures a secure and safe waterfront during the project development period in line with authorities’ requirements.

Contrasting with the standard solid metal sheet hoarding commonly used by the property and construction industry, TPD has invested in a specially-designed permeable mesh fencing material which enables the public to continue enjoying the sea view and breeze. For aesthetic purposes, planter boxes were attached to the fencing and creepers grown to add greenery to the alignment.

In careful consideration of the iconic casuarinas that flank the Gurney Drive promenade, TPD has extended the fencing outwards beyond the existing sea wall, ending just after the trees at the grass verge. This measure allows space for pedestrians on the grass verge to be maximised.

Fencing installation works were completed in late May 2016. 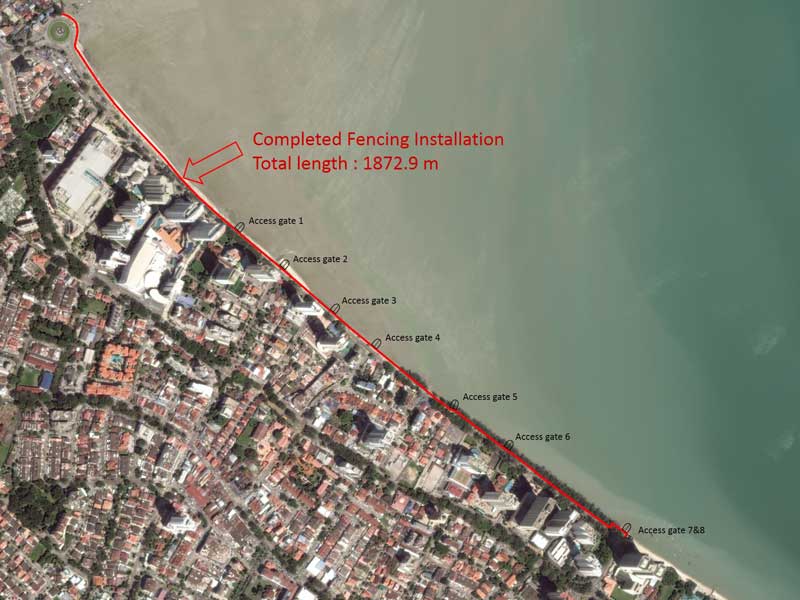 Aerial view of the completed fencing along Gurney Drive 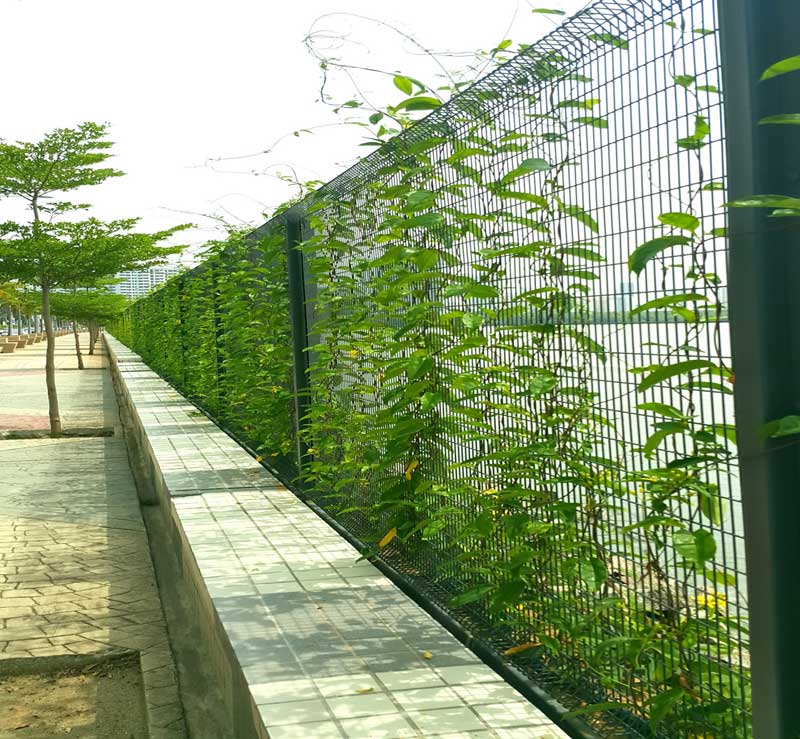 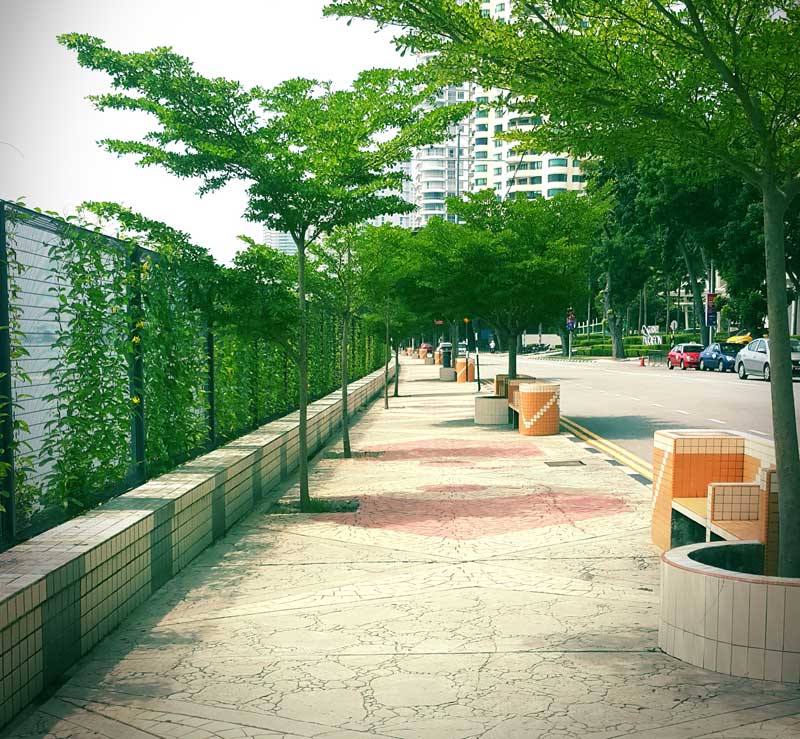